Today started out as I had planned.  I woke up early to go and pray before the clinic but enemy had other plans. He thought that he could thwart prayer to end abortion and for the salvation of souls simply by causing a small mishap with a vehicle.  He is not very bright, nor is he very creative.  I was on my way to the clinic and I blew a tire on the highway – I was fine, the car was fine, just a bit inconvenienced.  I was able to pull off the road safely and figure out what I needed to do and then just wait where I was for someone to come and change my tire.  But, what the enemy hadn’t realized was I COULD STILL PRAY!  It didn’t matter that I wasn’t physically in front of the clinic – prayer can happen anywhere.

I will go off topic slightly today because something is on my heart that I would like to write about.  I was reading this morning in The Message out Luke’s gospel and Jesus said “Get ready for trouble. Look to what you’ll need; there are difficult times ahead. Pawn your coat and get a sword. What was written in Scripture, ‘He was lumped in with the criminals,’ gets its final meaning in me. Everything written about me is now coming to a conclusion.”  I believe we may need to consider taking this scripture to heart given the times we live in.  If things in this country do not turn around we will be looking at difficult times ahead.  If the church remains complacent too much longer about the abortion issue it will see other unwanted invasions.  Right now our religious liberty is at stake with the current HHS mandate as it is written which provides for tax payer funded contraception, abortion-inducing drugs, and sterilization.  By virtue of the fact that ALL employers, including those religious convictions go against such things, must provide these must provide these at no cost to their employees, they believe they would be forced to go against their conscience.  Many Christian employers have already filed law suits against the government. If these employers hold fast to their convictions and do provide their employees with insurance they will be fined and the fines will bankrupt the companies.  This kind of government coercion in America is unheard of.  Last weekend a movement began in Washington DC that I pray will continue, no matter the outcome of the election.  That movement is known as ActsFive29, which taken from the scripture is referring to Peter standing before the Jewish Council and declaring that they will obey God rather than men when it comes to unjust laws.  The church of Jesus Christ can no longer sit by idly while these things happen.  We will be like the frogs in the slowly boiling water, never aware of how hot the water is getting until we are suddenly cooked.  I would challenge anyone reading this blog today to watch the movie For Greater Glory.  Here is what is posted on the movie’s website:

What price would you pay for freedom?

In the exhilarating action epic FOR GREATER GLORY an impassioned group of men and women each make the decision to risk it all for family, faith and the very future of their country, as the film’s adventure unfolds against the long-hidden, true story of the 1920s Cristero War ­the daring people¹s revolt that rocked 20th Century North America.

This movie is based on a true story on something that happened virtually overnight less than 100 years ago! 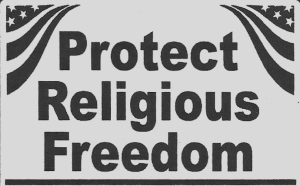